Boggle is a word game designed by Allan Turoff and originally distributed by Parker Brothers. The game is played using a plastic grid of lettered dice, in which players attempt to find words in sequences of adjacent letters… Wikipedia

This problem is also said as Jigsaw Crossword Puzzle. You are given a board containing MxN cells, each letter containing an alphabet of the English language. The goal of the program is to traverse through different cells to find a given word such that the following conditions are satisfied.

Result should be the number of times the given word occurs! 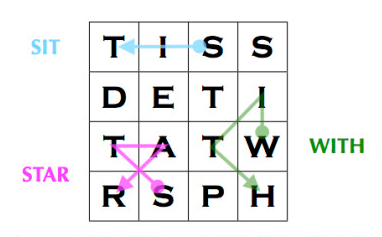 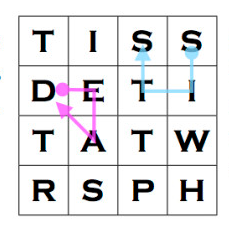 Paths made using pink are invalid

DIY : It is highly recommended to try solving it without looking ahead!

This part describes the algorithm or pseudo code for boggle solver.

DIY : This should give you some hint! Follow these steps and try building the code you started!

You tried and you found it difficult, it is find. I have also found problems difficult. What I do it try to solve them, if I cannot, I see how others have done it. Then I make sure that next time I can do it for sure!

I have commented out most of the portions of my code. I have also left it unoptimized for better readability. If you find any line difficult to grasp, feel free to comment below. Here is the code: